Fifty years after five navy bombers mysteriously vanish in the Bermuda Triangle, a researcher finds a sunken aircraft he believes is one of the missing planes. 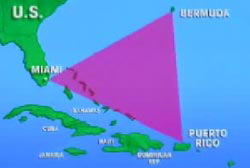 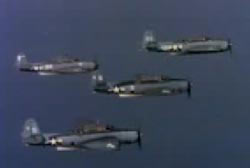 Five navy Avenger torpedo bombers take off on a routine training mission known as Flight 19. There are fourteen men on board. Five hours later, the entire squadron has vanished without a trace, and a modern legend of the supernatural is born. 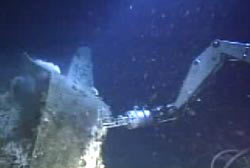 It has been called “The Triangle of Death,” “The Hoodoo Sea” or “The Graveyard of the Atlantic.” But to most of us, the area where the five planes disappeared is known as “The Bermuda Triangle.” The area extends from the south of Florida, northeast to Bermuda, and southeast to Puerto Rico. Some researchers claim that since the early 1900s, over 100 ships and planes have disappeared in this region. But the Triangle’s most famous victims were the five Avengers of Flight 19.

Some say that Flight 19 was swallowed up by supernatural forces. But after years of research, a former helicopter pilot named Jon Myhre has a more scientific theory. Jon carefully studied the squadron’s flight plan, radio transmissions, and the weather on the day of the disappearance:

“When I read this story, and I read the transcripts of the radio conversations, it triggered a response in me, and I said, ‘If this is true, and this is true, then I think I can find one of the airplanes.” 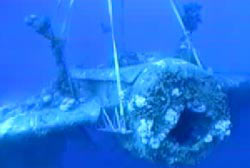 A crane lifted the coral-encrusted fuselage

The story of The Lost Squadron began at the Naval Air Station in Fort Lauderdale, Florida. It was the afternoon of December 5th, 1945. Lt. Charles Taylor was assigned to command Flight 19. He was known as a cool, capable pilot, with over twenty-five hundred hours as a naval aviator.

The crew of Flight 19 was briefed on the routine training exercise. Just before takeoff, Lt. Taylor made a strange request: he wanted to be removed from the flight. He said he wasn’t feeling up to it. But Taylor was the only instructor on base that afternoon, so he had to fly. The five planes lifted off and headed out over the Atlantic.

Their plan was to fly 123 nautical miles southeast, practice a bomb run, push 73 miles northwest, and head 120 miles back to Fort Lauderdale. Dianne Lawes is a Flight 19 researcher:

“Flight 19 consisted of four student pilots who were qualified naval aviators. They each had more hours in the air than the FAA requires now for commercial license. They had gone through all of their training, except for this one flight.”

Jon Myhre points out that Lt. Taylor was not leading the squadron:

“The flight was not following Charles Taylor. He was the instructor pilot who was trailing behind the rest of the flight. He was grading their performance. He wasn’t doing the navigating. The other pilots in the flight were doing their own navigation.” 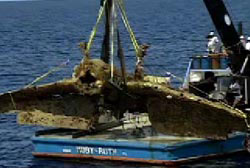 Was this Avenger from Flight 19?

The men successfully completed the practice bomb run. But on the second leg of the flight, Taylor’s compass began to malfunction. He asked another airman what his compass reading was. The airman reported 330 degrees. Myhre believes the crewman’s compass reading was correct. But Lt. Taylor remained convinced they were lost. When he looked down and saw a string of small islands, Taylor assumed they must be over the Florida Keys. But Taylor had made a critical mistake. Flight 19 was not in the Gulf of Mexico. Myhre believes that the squadron was actually flying over the Abaco Islands in the West Atlantic, 300 miles northeast of where Taylor thought he was. From the air, the two island chains look very similar.

Taylor ordered the planes to fly northeast, then due east. If they had been over the Keys, this route would have taken them safely home. Instead, it took them further out to sea.
By 5:00 PM, the sun was setting and the weather was getting worse. Flight 19 was headed east, away from their base, when they began losing radio contact. The base heard one of the last pilot-to-pilot communications: “If we just headed west, we’d get home. Dammit, if we’d just head west, we’d get home.”

Fuel was low and time was running out. According to Myhre, Taylor finally listened to his crewmen and headed west towards the Florida coast:

“So he flew due west for 49 minutes, until the first airplane crashed.”

Myhre thinks the remaining four pilots then made another fatal mistake. They were only seven minutes away from the Florida coast, but they still had not spotted land. They began to think they perhaps they were flying over the Gulf of Mexico. So they once again reversed their course and headed east. This took them back out to sea, where they disappeared. The fate of Flight 19 was sealed.

For the next five days, the Navy conducted a massive search. No trace of the planes or the fourteen missing men, was ever found. However, Myhre believes that some of the men of Flight 19 were alive, drifting at sea:

Myhre believes the first plane crashed just thirty miles off the Florida coast, near Cape Canaveral. But finding a single Avenger in the ocean was an overwhelming task, until a national tragedy struck.

In 1986, the space shuttle Challenger exploded after liftoff from Cape Kennedy. Some of the debris fell in the exact location where Myhre believes the first plane crashed. The Challenger salvage team reported a wrecked plane submerged in 400 feet of water. Jon Myhre believed the discovery supported his theory. Several years later, he was able to see for himself. Myhre went down in a submarine to inspect the wreckage:

“We knew we had a wreck, but we didn’t know what type of airplane it was. And to say I was on the edge of my seat, along with my colleagues, would be an understatement.”

As they came near the wreck, they could see nothing in the murky water. Then, the wing of a plane became visible. But was it the right plane? One distinctive feature of the Avenger is its bomb bay, located under the fuselage. The submerged plane was upside down, and the bomb bay cavity was clearly visible.

Another recognizable feature of the Avenger is its wheel well, on the underside of the wing. And the Avenger’s most unusual feature is the ball turret, which protected the gunner behind the pilot. Both these features were visible to Meyer. It was clear that Myhre had found an Avenger. But was it one from the lost Flight 19?

Using the submarine’s mechanical arm, Myhre removed the engine cowling. He was hoping to find a serial number that would confirm that this Avenger belonged to Flight 19. But after examining the cowling, Myhre was unable to find any serial numbers:

“The only way to prove whether this is indeed a Flight 19 aircraft is going to be to raise that sucker out of the water. I and my partners believe that we’re correct, but it’ll remain a mystery until we can raise the airplane.”

Lifting a plane from the floor of the ocean is no easy task. But Jon Myhre’s solid research had attracted supporters. With new partners Larry Schwartz and Dianna Lawes, Myhre began a massive recovery operation known as Project 19.

“There was a Navy bureau number on the engine, and there was also a manufacturer’s stamp number in the engine block. So if we raise that engine, we should be able to get a positive ID from that. Now, as to how much corrosion has occurred, that’s difficult to say.”

The next step was the recovery of the wing and fuselage. The submarine’s crew attached a cable to a harness that held the sunken plane. The crane began to slowly lift the plane 400 feet to the surface. But the coral-encrusted Avenger weighed about three times more than expected. The harness and cable strained under the weight. As night fell, the crane’s steel cable suddenly went slack. It had snapped in two, sending the Avenger back to the bottom.

At dawn, the crew was ready to try again. The submersible was launched to relocate the wreckage. Tim Askew was Project 19’s operation’s director:

“It’s still sitting in the same position that it was before, which is upside down. All the rigging is still on it, so all we have to do is get down there and hook onto it and it’s gonna come up.”

But this time, as the plane came up, there was another problem. The wings were buckling. Divers immediately went down to reinforce the wings. If they failed, according to Project 19 Administrator Larry Schwartz, the wings would tear off and the plane would sink again to the ocean floor:

“The heave of the boat was causing the wings to flap up and down about two feet. We don’t want to stress it. So we put straps around the outer portions of those wings, brought them up tight to give them a little extra support.”

The Avenger torpedo bomber resumed its ascent. Finally, the plane broke the surface.
For Jon Myhre, the successful recovery of the Avenger marked the end of a nine-year quest for the truth:

“You know, it’s strange. You think you’d be elated, and everybody’s screaming and jumping up and down. For me, it’s there, but it’s subdued. It’s tempered by knowing some good people died a long time ago, and we’re not gonna forget them.”

The wreckage of the Avenger was taken to Marine Land, near St. Augustine, Florida. There, members of Project 19 recorded the numbers from parts of the recovered aircraft.
Several of these numbers partially matched those of one of the lost Avengers from Flight 19. But, unfortunately, Myhre and his team were unable to positively identify the recovered aircraft.

Perhaps someday, the other planes that were lost that fateful day will be found and the mystery of Flight 19 will finally be solved.