Is a man who died before completing his dream house now haunting the residence? 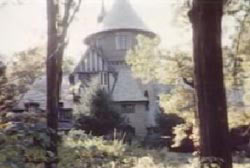 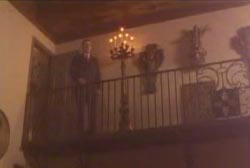 Some say that Bill’s ghost haunts the castle

In 1923, a wealthy executive named Bill Beaty, and his wife, started building a seventeenth century style Norman castle on 150 acres of woodland in Basking Ridge, New Jersey. In 1930, before construction was complete, the Beatys moved into the castle with their four children. But Bill would never see the completion of his dream. Just one year later, he died of the flu at the age of 45. His castle wasn’t finished for another five years. 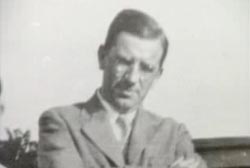 Sarah Beaty never remarried. She raised all four children in the castle, and lived there until 1941. After that, the castle served as a boy’s school for several decades. In 1972, Don Burlingame and his wife, Carol, bought the estate and began to re-model:

“Carol was really the first one to feel some sort of presence, and she had a friend that was sort of amateur parapsychologist, and she said, ‘There definitely is a presence here.’ And Carol said, ‘Well, maybe we should try to get rid of him. Shouldn’t we have a séance?’ And she said, ‘No, you better leave things exactly the way they are. He’s friendly, he’s happy, let it go at that.’”

After Don and Carol moved in, hammering noises echoed through the hallways and footsteps were heard going up and down the stairs. Don and Carol started to accept that they shared their home with the ghost of Bill Beaty. On one occasion, Bill demonstrated just how much he really cared about the castle. According Carol, she and Don planned to go out for a drive:

“Don said, ‘You better close all the windows, it’s supposed to rain.” I said, ‘No, it’s not gonna rain, don’t worry about it, I’m leaving them all open.’ So I left them open. We went out, and it rained. We came home, and all of the casement windows, which opened from the inside, and opened to the inside, were all closed and latched. There wasn’t a drop of rain in the house.”

Bill Beaty’s ghost also seemed to have a sense of humor. Carol said he liked to play around with the TV signal:

“You’d just get into a movie, just the really interesting part, and all of a sudden the station would change. It would go from two, to three, to four to five, and it happened more than one time. I knew that there was a presence here. What I couldn’t figure out was, when was he going to leave? If in fact, was he ever going to leave? It was something I couldn’t figure out.” 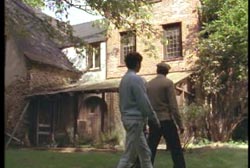 The Burlingames began to look into the history of the castle. That’s how they found Eugene Melville, who used to work there:

“I had told them what I’d seen there, and they said they’ve sensed something themselves. But they never saw him. I have only seen him that once. I can truthfully say that was the only time I have ever laid eyes on him, was that once.”

In 1934, three years after Bill Beaty’s death, Eugene was helping Sarah search for a bracelet she had lost when the figure of a man briefly materialized on the balcony. Sarah cried out that it was Bill:

“It was a figure of a man standing there. It didn’t stay long for me to examine it very good. It was gone just like that. It was scary. It frightened the daylights out of me. I just never wanted to go on that balcony again. I passed by it, but to get me in there, to stand there, oh, forget it. I wouldn’t go in there.”

According to Carol, Bill had something of a throwing arm:

Don and Carol invited Dr. Michaeleen Maher, a noted parapsychologist, to visit the castle. Mayer and her assistant conducted a series of tests for paranormal activity:

“Our physical instruments were not able to detect anything unusual, but in this particular case, the sheer volume of the reports adds to the credibility of the case. One of our witnesses in this case, a particularly credible witness, in fact, a professional person of some stature, reported seeing in the driveway, in front of the castle, a person who dissipated right in front of his eyes. I think the big news here is that humans can act as sensors and we find that we cannot dismiss this evidence as caused by coincidence.”

Carol has concluded that the key to living with ghosts is acceptance:

“If you can accept it, you can enjoy it, and when things happen you just write them off as ‘Oh, it must be the ghost,’ or ‘It must be Bill,’ if you happen to know who it is.”

“I firmly believe he will never leave the castle. The love of the thing maybe got the better of his soul. And I think that’s the thing that has such power, it’s the soul. It’s eternal.”