Homes built on top of a cemetery may be cursed. 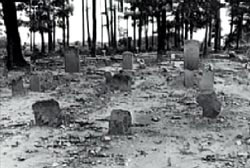 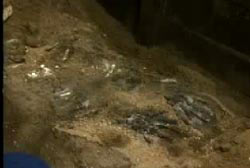 Human remains were found in the backyard 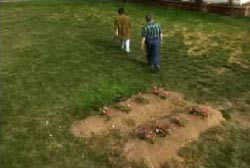 Just outside of Houston, Texas, is a neighborhood filled with upscale homes and manicured lawns. In the early 1980s, Sam and Judith Haney settled in at the far

western edge of the development. Sam described it as their dream home:

But there was a morbid secret about the Haney’s perfect home, one that soon turned their lives into a never-ending nightmare. Sam said it all began when a mysterious old man showed up at their door with an ominous warning:

“This elderly man told me that he had noticed that we were putting a swimming pool in our backyard and that there was something about our backyard that I needed to know about. So I followed him around to my backyard and he pointed at the ground and said that there are some graves right here. And he marked a spot on the ground where they were. And I really didn’t know how to react to that. I didn’t know if he was just joking. I couldn’t understand why anyone would want to joke about something like that.”

Using a backhoe, Sam decided to see if the man’s alarming claims were true. Sam says it wasn’t long before he hit something:

“And at that point, we stopped with the backhoe and we got down into the hole and continued digging by hand. There were pine boards. When we lifted up the first board, we could see an indentation of a skeleton form. It didn’t take long to figure out that it was actual human remains.”

Sam immediately called the Sheriff and county coroner who conducted an official exhumation. Most of the bones had turned to powder. But 25 fragments were found, some so brittle that they disintegrated when touched. 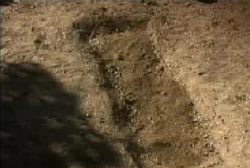 The Williams’ discovered they had graves to

A second coffin, located alongside the first, hadn’t been disturbed. Inside, two wedding rings were discovered on the frail index finger of the exposed skeleton. Judith Haney was mortified by the discovery:

“They handed me the rings and it was sickening to think that I had desecrated somebody’s grave.”

Wanting desperately to do the right thing, the Haneys decided to find out whose remains were buried in their backyard. The search led them to a longtime resident named Jasper Norton.

Years earlier, Norton had dug several graves in the area. He told the Haneys that their home and a dozen others were built on top of an old African American cemetery called Black Hope. The deceased were mainly former slaves. The last burial was in 1939, and as many as 60 people were interred there in paupers’ graves. 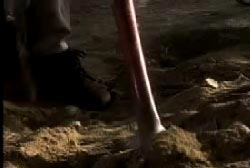 Jean decided to dig for the bodies

The two people buried in the Haney’s backyard were Betty and Charlie Thomas. They died during the 1930s and their graves were eventually forgotten.

Judith and Sam Haney made an extraordinary decision. They reburied Betty and Charlie in their yard, and prayed their spirits would rest in peace. But, according to Judith, peace was not forthcoming:

“There was a clock in my bedroom and one night it started sparking and putting out a sort of blue glow.”

When Judith checked the clock, she found that it was unplugged. That was only the beginning of the Haneys’ ordeal. On another evening, Sam went to work the night shift, leaving Judith alone:

“I heard the sliding glass door open and I heard what I thought was Sam saying, ‘What you doing?’ Everything was quiet, the sliding glass doors were locked, and I thought, ‘Well, you know, you must be losing your mind. This really must be getting to you.’ But much to my amazement that’s not where the story ended. In the morning I awoke, went in my closet to get my red shoes, and I could not find them anywhere.”

“So, of course, I started looking for them and went through all of her closets where she normally puts things. And we just couldn’t find them. We had walked just a short distance from where the gravesites were and I could see something on the grave. And they were both side-by-side like someone had just picked them up and carried them over and laid them down on the gravesite.”

Even more disturbing to Sam was the realization that this was Betty Thomas’ birthday:

“And I kinda got the feeling that it was like Charlie was giving Betty a birthday present.”

Judith felt she knew what was going on:

“I began to come to the realization that this was not all in my mind and that this had to have some relationship to Betty and Charlie’s graves being disturbed. Their spirits were saying, ‘This isn’t right.’”

The Haneys were not alone. A dozen of their neighbors also reported lights, televisions and water faucets turning on and off, and unearthly sounds and supernatural apparitions. Worse, these bizarre events were becoming malicious.

Like the Haneys, Ben and Jean Williams thought that they had found their suburban paradise when they moved into the same neighborhood. But Jean said she never felt at peace in the house:

“After we moved, in everything changed. When I tried to plant new plants, they just would not live no matter what I did. You know, fertilizer or whatever, they still would not live. And I constantly had a foreboding feeling, a feeling of things are not right or something bad is about to happen.”

The Williams said that near their flowerbed, sinkholes appeared in the unmistakable shape of a coffin. The Williams would fill them in, only to have them reappear a few days later. The Williams also felt their ideal home was being invaded by a menacing presence. Random shadows slid along the walls, followed by whispered words and a putrid smell.

At the time, the Williams’ granddaughter, Carli, lived with the couple. During the blazing heat of summer, Carli said she would stumble into bone-chilling pockets of ice-cold air:

“It would be very, very chilly and you’d have this feeling of foreboding, or just, you know, like something wasn’t right. Anywhere in the house you’d have a feeling that you were not alone. Somebody was watching you. It terrified me to be in the house by myself. The toilets used to flush on their own. As the water went down I could hear, it was almost like conversations. You could hear people murmuring to themselves. It was a presence or spirit or something there. Something that wanted to be heard. Wanted me to know that it was there.”

Jean Williams had no doubt as to the source of the disturbances:

“I absolutely believe that all of these things happened to us because we were on the graveyard, and that we were simply going to be tormented until we left there.”

Ben said he and Jean debated what to do next:

“Me and Jean, we talked it over. And she said, ‘Well what can we do? Walk off and leave it?’ She said, ‘We ain’t got enough money to pay down on another home.’ I said, ‘We’ve always been fighters. We’re gonna stay right here and fight it and try to beat it.’”

According to Ben, it wasn’t long before he got his chance:

“I came home from work around ten after twelve from the midnight shift, and I walked straight to the kitchen, opened the refrigerator door, and that’s when I seen these two ghostly figures. And they went straight backwards into the den. And then they started heading right down the hall to Jean’s. And it was standing right about a foot and a half from the end of the bed. The only thing I really thought of was, ‘They ain’t messing with me wife.’ As I dove through it, I felt a sticky cold sensation in my body.”

Down the street at the Haney’s, Judith said the disturbances caused her life to unravel:

“I was crying all the time. I was frightened. I was scared of doing my daily routine in my own home.”

The Haneys decided to fight back in court. They sued the builder for not disclosing that their home was built over a cemetery, in part, so that everyone would know what was happening at their subdivision. A jury awarded them $142,000 for mental anguish. But a reversal ruled on legal grounds that the developers were not liable. The verdict was thrown out and the Haneys were ordered to pay $50,000 in court costs. Sam Haney recounted the total cost of their ordeal:

“At that point we decided to file bankruptcy. All in all, we ended up losing the case, losing the money, losing the house.”

The Williams also explored legal recourse. But they say that they were told that without definitive proof of a cemetery on their property, nothing could be done. It was then that Jean made a decision that she will forever regret:

“That was the last straw. You want a body? I’ll show you a body. So, I thought to myself, I can dig about two feet a day and I knew I would reach a body.”

But soon after she started digging, Jean felt ill. Her adult daughter, Tina, volunteered to finish the job. After digging for a half hour, Tina also fell ill. Carli Karluk was there that day:

While waiting for paramedics to arrive, Jean tried to keep her daughter conscious:

“Almost immediately her eyes started glazing over. And I was talking to her, trying to talk her out of dying. ‘Please Tina, talk to me.’ And all this time her eyes were changing until they got to the point where I knew that she wasn’t responding at all.”

“I realize that I had desecrated another grave and now I’m paying. I told Ben, ‘We have to get out of here. It doesn’t matter what we lose, what we had.’ And I knew that if we didn’t, that I was not going to make it, because my fight was gone. I could fight no more.”

The Williams escaped to Montana and later moved back to another house and another neighborhood in Texas. Today they are a happily growing family, no longer plagued by mysterious noises, horrific apparitions or heart-breaking tragedies.

Back in their old neighborhood, none of the current residents have reported any paranormal activity. No one has ever been able to explain what happened to the Williams or the Haneys.