1940’s mafia hit man Bugsy Siegel becomes the target of a hit himself. 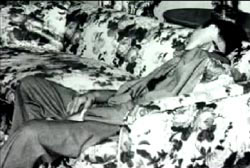 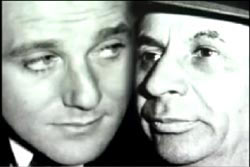 In the 1940s, Mafia bosses took pride in killing and getting away with it. But there was one famous hit for which no one has ever taken credit– the murder of Bugsy Siegel.

Late in the evening of June 20, 1947, Siegel was resting in his girlfriend’s Beverly Hills home when nine shots were fired from outside. Four found their mark, killing Bugsy instantly.

The list of suspects in Bugsy Siegel’s murder include business associates, a girlfriend, even a bodyguard. But police investigating Bugsy’s murder came up against the Mafia’s code of silence, a wall that still exists today, according to Detective Les Zoeller of the Beverly Hills Police Department:

“The main frustration I have in the case is all my witnesses are either gone or still won’t talk. So the frustration is that I’m running out of time, if I haven’t lost that time already, and I’m just still not getting any information.”

Bugsy’s real name was Benjamin Siegel, and he was the mob’s most feared hit man. 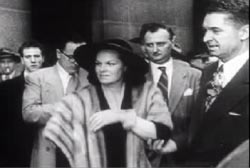 Siegel began a partnership with Meyer Lansky in New York. They formed an organized crime syndicate with its hands in gambling, prostitution, and murder for hire. Author William Balsamo, who wrote Crime Incorporated, wrote about the syndicate:

“Lansky did the thinking and it was Bugsy who did the whacking.”

In the early 1940s, Siegel and Lansky teamed up with another East Coast Mafia boss, Lucky Luciano. When the team of Siegel, Lansky, and Luciano decided to expand their territory, Bugsy was sent to take control of gambling in California. There, he faced a major problem: suspect #1, Jack Dragna.

Dragna controlled a lucrative wire service used by bookies across the country, and Bugsy wanted it. He made a simple proposal: give up the wire, or give up your life. Dragna chose to live, which gave him two motives to kill Bugsy Siegel: jealousy and revenge.

After Bugsy died, Jack Dragna got his wire service back.

After arriving in Los Angeles, Bugsy began an affair with suspect #2, Virginia Hill, an alleged cash courier for the mob. But Hill may have had her own reasons for wanting Bugsy dead. According to author William Balsamo, she was leading a double life:

“Virginia Hill was definitely connected in some way with the Chicago mob. She was out there keeping an eye on Bugsy and feeding the Chicago mob information on Bugsy’s activities.”

Bugsy was killed in Virginia’s home while she was out of town. Coincidence, or not?

Suspect #3: Mickey Cohen. Cohen was a Cleveland gangster newly transplanted to L.A. Siegel could have killed him. But instead, he made him his personal bodyguard.

After Siegel’s death, Cohen was given control of West Coast gambling, which could never have occurred unless Bugsy was out of the picture.

“Lansky did go out and visit Siegel in Nevada. And I think he cautioned him, and he warned him, “Pay attention to the business, don’t let the costs get too high. Your investors are not happy.”

There were also rumors that Siegel was pocketing some of his investors’ money to support Virginia Hill:

“She was a very, very expensive playmate. They probably had a feeling that he was spending some of their money on Virginia.”

Twenty minutes after Siegel’s death, two members of the Lansky/Luciano mob took control of the Flamingo Casino. No one believed the timing of the takeover was coincidental.

There are five suspects who could have been involved in Bugsy’s death. Some feel the most likely scenario involves them all.

Virginia Hill provided the location for the murder and possibly was given a reward.
Siegel’s bodyguard, Mickey Cohen, knew his boss’ schedule for the evening. But at the time of the killing, he was not doing his job. Jack Dragna, with the approval of Lansky and Luciano, may have ordered the hit. Ralph Salerno, organized crime expert:

“He would not have dared to do it on his own. He would have asked permission from people he regarded in the New York area. It’s a possibility, because they were thinking of killing Siegel anyway, so all right, let Jack Dragna handle it.”

Today, none of the key suspects in the Siegel murder are alive. But Les Zoeller of the Beverly Hills Police still hope that someday the Mafia code of silence will be broken:

“Murder has no statute of limitations. So until the case is solved, the case remains open.”