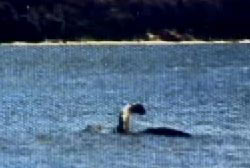 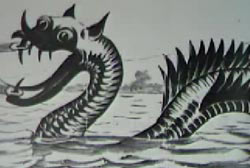 The Iroquis told tales of a giant serpent

Tales of a giant serpent living in Lake Champlain date back to the time when Native Americans lived in the area. But over the years, many have come to believe the creature is real. There have been hundreds of reported sightings. The locals have even given it a name, Champ. 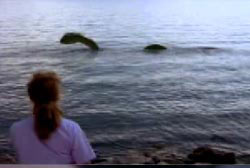 Sandra Mansi grew up near Lake Champlain. When she was a child, her grandfather teased her with scary tales of the legendary sea creature:

“Grandfather told us all about Champ, and when we would go fishing, he would say to us, if you don’t sit down and behave in the boat, I’m going to throw you over and Champ’s going to eat you. Of course, we didn’t believe a word of it.

Then in July of 1977, Sandra, her two children, and her fiancé, Tony, were on vacation near Lake Champlain:

“We stopped at this one place and the children were down further on the beach, having a great time, and Tony decided to go back to the car and get the camera. And I’m looking out at the lake, and the lake started churning. My first thought was scuba divers. But then it’s too much, it would be too big of a group of scuba divers. But then fish, there’s some very large sturgeon and big walleyes in Champlain, so I thought well, it’s a very, very large school of fish. Then the head and the neck came up out of the water, and then the back. And I watched it turn its head and neck, and look around. When it first came up, its mouth was open and I could see water coming out of the mouth, and I’m feeling like I shouldn’t be there. Because to me, this thing should have been extinct thirty million years ago. But I’m not frightened. I’m in total awe and very calm. Then Tony came back and he saw it and he got all panicky, screaming and hollering at the kids to get out of the water. He helped me up the bank, and when he did, he handed me the camera, and I turned around, and it’s still there. And I picked up the camera and took one shot.”

When Sandra saw the picture she’d taken, she was certain it was Champ. She was equally certain that no one would believe her, so she threw away the negative and kept the photo hidden. Finally, Sandra had the snapshot blown up into an 8 x 10 inch print. She contacted Joe Zarzynsky, who’d written a book about Champ. Joe sent the print to the University of Arizona to be analyzed. Cryptozoologist Richard Greenwell:

“We digitized it and ran all sorts of computer enhancement techniques. We were looking for pulleys or ropes or anything like that, superimpositions, but we found no evidence of hoaxing, and we concluded that the object, whatever it is, was there in the lake, at that estimated distance. It wasn’t any sort of superimposition.”

When the photograph was released, it caused a media sensation. The New York Times and Life Magazine carried the story. Was it really a sea monster? Richard Greenwell wondered if Champ was a prehistoric animal that had somehow managed to survive:

“The object in the Mansi photograph resembled a plesiosaur, which is an aquatic reptile from the Cretaceous, about 60-70 million years ago. Long neck and flippers. It resembles that, but that’s a long time to have survived.” 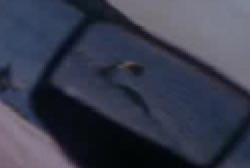 The photograph was studied

Another idea was that Champ might be a zeuglodon, a snake-like whale extinct for twenty million years. Or perhaps Champ was simply a lake sturgeon, which have been known to reach seven feet in length. No matter what it was, ever since the Mansi photograph went public, dozens of eyewitnesses have reported sightings of Champ.

On July 7, 1988, Walter Tappan, his wife Sandi, and their daughter Heidi, went out on Lake Champlain with a camcorder. They were sure they’d seen “Champ” the previous evening. Walter hoped lightning would strike twice in the same place:

“It was a quiet night, just as still as glass, like the first night had been, and I was full of anticipation and excitement, but also, not necessarily expecting anything. Then they spotted one not far from the boat. At the most, 50 or 60 feet from the boat. And then began shooting footage for about twenty or thirty seconds of these humps gliding along, first two, then three, then four, then suddenly five, all in a row, stretching out about twenty feet.” 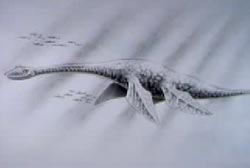 Could Champ be prehistoric?

Walter’s wife described what she saw:

“I had probably, I would say, seven different sightings of them. So I decided to climb up and stand on the sundeck and I just scanned the water like that, and lo and behold, I saw one of those bull humps coming along the water, and then all of a sudden, the neck and the head came up and it looked right at me. I will never forget it. And I was screaming with excitement, which I wish I wasn’t doing, because it went down more rapidly. Came back and then very gracefully, very slowly went back down into the water just like that.”

Walter said he had no doubt about what he, Sandi, and his daughter had witnessed:

“There was no time for me to get the camera and refocus. I’d give anything now to have that on footage, because what Sandi saw was, of course, an astounding thing. This creature looking at us and lifting its head out of the water. And what it did was to confirm, absolutely for all of us, that what we had seen was Champ.”

Scientific opinion is varied, but at least one expert believes that what Walter Tappan photographed was nothing more than a school of fish. But who can explain the Mansi photograph or the hundreds of eyewitness accounts recorded through the centuries?
For Sandra Mansi, it can be only one thing: