Some think a Satanic cult was responsible for the murder of a young couple. 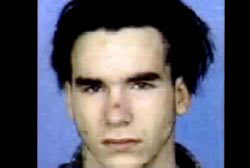 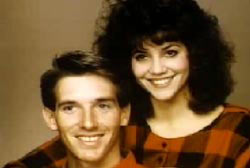 The victims, Pam and Eric Ellender 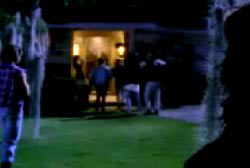 There was a party after the murders

In junior high and high school, Pam Littleton of Sulfur, Louisiana, was voted the most popular, the friendliest, and the prettiest girl. She was a cheerleader and she was chosen Homecoming Queen. After college, Pam married Eric Ellender, a bright, up-and-coming businessman. They bought a house near Pam’s parents, and Eric went to work for Pam’s father.

A year later, Pam gave birth to a baby girl and the family circle was complete. According to Pam’s father, Huey Littleton, nearly every day Pam would walk over to her parents’ house with the baby for a visit:

“Pamela, I guess, was the type of daughter that every father would dream of. She had dreamed of being a housewife and a mother. That was her ambition in life. And she was totally happy.”

It was 8:45 PM on February 11th, 1991, the Monday before Mardi Gras. Pam’s husband, Eric, called her at her mother’s to say he was home from work. Pam left for home thirty minutes later.

The next afternoon, Huey Littleton got a phone call from his mother-in-law:

“She says ‘Huey, I just left Pam and Eric’s and something’s wrong. They’re in their bed. I have the baby and I’m back at your house. Call the sheriff.’ The sheriff’s unit met us at the gate, going into the yard and asked that we not go near the house. We learned that Pam and Eric were dead, that both of them had been brutally shot with a shotgun and that the fatal wounds were to their heads.” 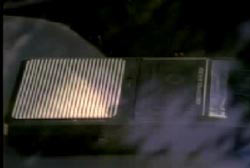 Another witness described the murders on tape

The only blessing was that Pam and Eric’s daughter was left unharmed. Huey says he and his wife were consumed by grief:

“It totally immobilized me. I couldn’t cry. All I could do is say why, and who?”

Eric’s car had been stolen the night of the murders. Eighteen-year-old Chris Prudhomme, and three of his friends were seen driving it in Baton Rouge. Prudhomme was arrested and became the focus of the investigation. According to Huey:

“He confessed under oath that he had killed Pam and Eric. He had no remorse for doing so, in fact was glad that he did so.”

Seventeen days after the murders, Prudhomme was found hanging by the neck in the jail shower room. In a suicide note found in his cell, Prudhomme took sole responsibility for the murders. He said; “I enjoyed very much in the taking of those two individuals’ lives.”

As far as the sheriff’s department was concerned, the case was closed. But to Huey Littleton, there were too many questions left unanswered. A licensed private detective, Huey began his own investigation. He came to believe that Chris Prudhomme was a member of a Satanic cult called the SKATERS, an acronym for “Satan’s Kids Against The Establishment.” The girlfriend of one of the Skaters told Huey about a meeting that took place the morning after Pam and Eric were killed.

The witness said the “Skaters” were trying to make up an alibi for whoever was with Prudhomme when the murders happened. She also said that Prudhomme and one accomplice had broken into the Ellenders’ house, planning only to burglarize it. But she said they were high on LSD and ended up murdering Pam and Eric, using one of Eric’s shotguns.

Feeling that many of the crucial facts were still unknown, Huey interviewed well over 100 witnesses. He was horrified when a girl named Nickie Alderson told him that just minutes after the murders, the Skaters held a party in Pam and Eric’s house. Nickie said one of the first people she saw at the party was Chris Prudhomme:

“They were all just standing around drinking, talking, and making different remarks about God and things like that. You can kind of feel from the vibes of people that something was kind of weird, because everybody was in their own little world. Some were doing some drugs on the table. They had enough drugs on there where I could see from a distance what they were snorting.”

Nickie claims she did not know that there were two dead bodies in the house until she was watching television the next day:

“I was watching the news and I saw the house. I was like, ‘Oh my God, I was at that house.’ Then I knew, you know, that was the guys that were there. They were the people I’d seen, and I come to the realization that I was there.”

According Sheriff Wayne McElveen of the Calcasieu Parish Sheriff’s Department, he agreed to take a look at Huey Littleton’s evidence:

The Sheriff’s Department says they saw no evidence that there was a party at the house. However, Huey found one other person who confirmed Nickie’s story. This witness added sickening details, claiming that the dead bodies of Pam and Eric were sexually molested by more than one person. Those claims were backed up by a man named Chip Richard. Although he was not at Pam and Eric’s house, Chip says he saw videotapes of what took place that night:

“What I saw on the video was the people killing the Ellenders, having sexual contact with them, just, basically, everything that really goes on, you know.”

Huey’s attention focused on 18-year-old Robert Adkins, one of the three men arrested with Prudhomme in Baton Rouge. Bobby Adkins was charged only in connection with the theft of the vehicle, but according to a friend named Shawn Moody, there was more:

“Bobby took me in the backyard. He told me that he wanted to tell me what had happened because he needed to get it off of his chest.”

While out on bail, Adkins allegedly told Shawn Moody that he was at the house when Chris Prudhomme killed the Ellenders:

“He told me they were looking around for valuables, him and Chris, and they had found a gun, a shotgun. And when they entered the master bedroom, the wife woke up. Chris shot the wife first and then the husband had woken and Chris shot him.”

According to Chip Richard, Adkins said that Prudhomme didn’t murder anyone, but had volunteered to take the fall out of loyalty to their satanic cult:

“He had told me that Chris was taking the rap for him ‘cause Chris was becoming the leader in the cult. Basically everybody that was with him worshipped him and, you know, would do anything for him, and in return he had to do for them the same that they would do for him.”

The next day, Pearl recorded a conversation with Kim’s permission. Kim described the murders in detail, but never admitted on the tape to being in the house herself. Pearl played the tape before a Grand Jury. For Huey Littleton, the moment was the pinnacle of his investigation:

“After hearing a lot of testimony, I mean, from many witnesses, the grand jury returned an indictment of two counts of second-degree murder against Kim Manuel.”

Some believe the indictment was a legal maneuver to pressure Kim Manuel into identifying other possible suspects. If so, the plan failed. Kim Manuel’s court-appointed public defender, John Laverne, called a press conference. He claimed that Pearl Fruge was lying and that the tape had been scripted and rehearsed. Pearl Fruge stands by her story:

“We never made up the tape. I never lied. What I told them was the truth and Kim knows it’s the truth. I can’t change what she told me and I’m not gonna make up another story just to make her look good.”

One year later, the charges against Kim Manuel were dropped. Huey Littleton was crushed. And, according to Sheriff McElveen, he had lost his credibility with the authorities:

“We felt sorry for him at first. But we gotta to deal with the facts. When you go before a judge and a jury, he won’t be able to bring all those accusations. He’ll have to deal with facts. And I think any grand jury, any district attorney, any attorney general, will agree with that.”

“I’m at peace with what I’m doing because we’re doing the right thing. We just want to see those that participated in the murders of Eric and Pam, and the cover up, and the destruction of evidence, brought to justice.”

On February 9, 1995, Robert Adkins and two other men were indicted in connection with the murders of Pam and Eric Ellender. Adkins pled guilty to manslaughter. He was sentenced to 21 years, but the sentence was reduced to five and a half years because he had already served time on the stolen car charge. The other two men served short terms as accessories after the fact.

The attorney general’s office in Louisiana now considers the case closed. But Huey Littleton will not rest until he knows exactly what happened the night of the murders.