Did D.B. Cooper survive his daring leap from a hijacked plane? 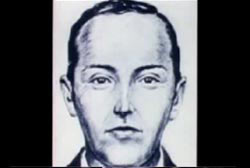 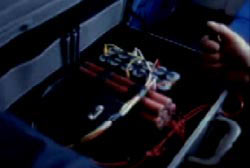 Cooper claimed he had a bomb

On Thanksgiving Eve, 1971, a man who identified himself as D.B. Cooper walked into the airport in Portland, Oregon. According to FBI agent Ralph Himmelsbach, there was nothing unusual about him:

“He was your typical businessman, a suit, tie, a raincoat, carrying an attaché case. Nothing distinctive about him except perhaps for the fact that everything was very dark, black tie, black raincoat, black shoes. He appeared at the ticket counter, bought his ticket and just gave the name Cooper.” 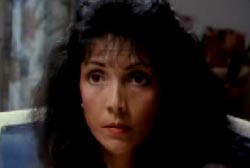 Cooper wanted assurances that the plane was a 727. Agent Himmelsbach explained why:

“The 727 became notorious through this case because it is the only airliner from which a successful parachute jump can be made from the passenger cabin.”

D.B. Cooper bought a one-way ticket to Seattle. His only luggage was a brief case. He was the last person to board the plane. He took his seat while the 727 begans taxiing to the runway. Flight attendant Florence Schaffner was the first crew member to talk to Cooper:

“He handed me a note and he kept looking at me. And I just ignored him the first time he looked at me and then he said, ‘I want you to read the note.’ It was printed, “Miss, I have a bomb in my briefcase. I want you to sit beside me.’

Cooper opened his brief case so Florence could see what was inside:

“I saw a big battery with six dynamite sticks wrapped around the battery. And he said to me, ‘All I have to do is attach this wire to this gadget here and we’ll all be dead.’” 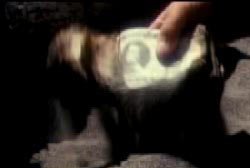 Some of the ransom money was found

And so began one of the most infamous unsolved crimes in U.S. history. To this day, no one knows the true identity of the man who called himself D.B. Cooper or if he survived his daring parachute leap from 10,000 feet. The case remains the only unsolved skyjacking in the world.

Flight attendant Florence Schaffner went to the cockpit to inform the crew about Cooper and his threat. She recalled:

“We were very, very scared to death. All of us were. I was thinking about dying. That’s all I thought. I was also thinking, ‘I’ll never see my parents, my brothers and sisters.’” 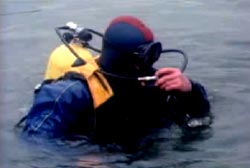 The flight crew immediately notified air traffic control about the hijacking. They, in turn, contacted the FBI. According to Agent Himmelsbach, Cooper’s demands were precise:

The flight crew proceeded as if nothing was out of the ordinary. Drinks were served. Cooper ordered two bourbon and waters.

Meanwhile, the FBI communicated with the airline. Agent Himmelsbach said the airline agreed to pay the ransom:

“The FBI asked the airline what their approach to the hijacking was going to be, that is, did they wish to pay the ransom. This is an option that the victim of extortion has rather than law enforcement, and they responded instantly that they wished to pay the ransom. And so the FBI at Seattle set about assisting in obtaining the money.” 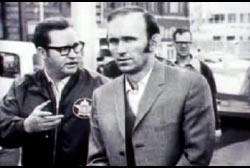 Each bill was photographed and the serial numbers recorded. Cooper also insisted the plane be refueled immediately once it landed in Seattle. No passengers were to be released until all of his demands were met. He also instructed that once it landed, the plane should stay on the runway rather than to taxi up to the terminal.

At 5:43 pm, Flight 305 landed at the Seattle airport. The plane taxied in and was parked in a remote area of the field. Then, according to Agent Himmelsbach, the bags of ransom money were brought aboard:

“They were carried on board by a flight attendant. There were ten thousand $20 bills assembled in straps of 100 bills to a strap, and individual straps held together with rubber bands. The money alone, just the currency weighed 21 pounds.”

Four parachutes were also delivered. Both the flight crew and the FBI were worried that Cooper would use the extra parachutes to take hostages along with him. The passengers on board were completely unaware of the drama surrounding them, which included FBI snipers, according to Agent Himmelsbach:

“During the time the airliner was on the ground at Seattle, there were FBI agents with scoped rifles who were prepared, if the indications were present, that required it to pick him off.”

Finally, the passengers were allowed to deplane. But Cooper demanded that the flight crew and one attendant stay on board. Florence Schaffner recalled her conversation with the co-pilot:

“The co-pilot said you better get the hell out now. So I left without Tina and that’s when he decided to keep her because he was getting suspicious at everything.”

The passengers were met by FBI agents. It was only then that they realized that that plane had been hi-jacked and that their lives had been in mortal danger. When debriefed, they could remember nothing about the man with the brief case.

Cooper ordered the pilot to fly from Seattle all the way to Mexico City, at a height of 10,000 feet, and a speed of only 200 miles an hour. He agreed to refuel in Reno, Nevada. According to Agent Himmelsbach, Cooper then made an unusual request: he wanted the rear stairwell to be lowered prior to take off:

“The pilot explained that he wasn’t able to take off with that door open and they argued back and forth and finally the pilot said he just couldn’t fly the airplane and wasn’t going to try, and the hijacker consented for the door to be closed for take-off, which it was.”

At 7:37, Flight 305 took off. The Seattle control tower alerted all other aircraft to remain clear. Cooper’s 727 had the sky to itself. Cooper then told the remaining flight attendant to go into the cockpit. Agent Himmelsbach elaborated:

“He told her to go back into the cockpit and to close the curtain between the coach and the first class cabins. As she turned around to close the curtains, she said she saw him tying something to his waist with what she thought was rope. Later in the cockpit, the light flashed indicating that the hijacker was attempting to operate the door. At 8:12, the pilot told us that they were experiencing a rapid change in the air pressure reflected in an ears popping experience.”

Somewhere over the forest of Washington state, Cooper jumped.

Upon landing in Reno, Nevada, every inch of the 727 was examined for clues as to who D.B. Cooper really was. But he left behind no identifiable fingerprints, no personal items, and no clue to his identity. The flight attendants who had seen Cooper up close helped create a composite drawing of his face.

The crew felt that Cooper had jumped somewhere near the southern tip of Washington state. It was believed he would be found in the area bordered by Lake Merwin and ending 20 miles north of Portland. No matter where Cooper landed, Frank Heyl believes he could have survived:

“Let’s say he went down in the water. You’ve gotta know how to manage that parachute. You can use it for some floatation. Now his life expectancy is not going to be very long in that water. It’s cold and you have to think of the time of the year it was in, so he had probably a very, very few minutes to get on shore. But I think he could’ve done this.”

A large white object was seen floating in Lake Merwin, but divers found nothing.
Agent Himmelsbach felt it was unlikely that Cooper could have survived:

“My feeling is he would’ve have been hurt regardless of what he landed into. I think that Cooper mostly crawled to a creek. He didn’t have any water supplies, didn’t bring any along with him, and he would’ve had to have water to survive. So I assume he made his way to a little creek and perished there.”

Some feel that Cooper could never have survived in that rugged terrain dressed only in a business suit. Frank Heyl suggested Cooper came prepared:

“We don’t know what he wore under the suit, could’ve had a pair of long underwear on which he certainly should have had. And what he had in pockets may have been the most important thing because this would’ve given him the tools of survival. As long as a man’s got a knife, a cigarette lighter and the clothes on his back, he could’ve lived indefinitely out there. It’s possible. I think he buried the chute. I think he probably buried the briefcase. He got rid of that. I think he probably put the money in his coat and I think he headed for a big city someplace and lost himself.”

The search for D.B. Cooper continued with no new clues. Then, in November 1978, a hunter deep in the Washington forest discovered a plastic sign from a 727. It had been ripped from the lower stairwell of Flight 305.

Fifteen months later, an even more dramatic discovery was made. On February 10, 1980, a family was preparing a barbecue on the shore of the Columbia River, 20 miles southwest of Cooper’s supposed jump point. They planned to dig a fire pit, but dug up something else: stacks of water logged bills totaling $5,880. Agent Himmelsbach confirmed it was part of Cooper’s ransom:

“There were 294 bills found and all of those serial numbers are on the ransom list. So that money is definitely positively identified as having come from that particular ransom money.”

Agent Himmelsbach had his own rational for why Cooper’s plan didn’t succeed:

“He risked his life to hijack the airliner. He didn’t get to spend the money. He may have lost his life. Now I don’t know that he lost his life, but I think there’s a very good chance that he did. None of the money, not one bill has ever turned up in circulation.”

Many believe that D.B. Cooper survived and some even think he may have struck again. Only five months after Cooper’s flight, a half million dollars was extorted by another hijacker. He was a former Green Beret and his name was Richard McCoy. He was sentenced to 45 years for air piracy, but he escaped and he was killed in a gun battle with the FBI.

Due to the resemblance between their pictures, some believe that D.B. Cooper and Richard McCoy are the same man. But flight attendant Florence Schaffner believes that the original composite of Cooper may be inaccurate:

Florence worked with Maylin Coleman, a forensic artist from the Los Angeles County Sheriff’s department. Together they created a new portrait of D.B. Cooper. Florence said Cooper’s was a face she’ll never forget: