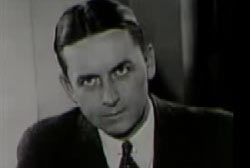 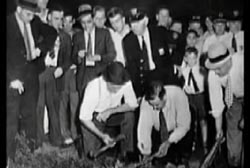 Mutilated victims were left for police 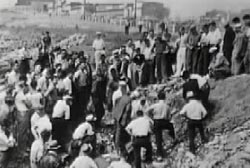 Chicago, 1929. Prohibition is “the law of the land.” Speakeasies, bootlegging, and police corruption are rampant. A young treasury agent is hired to smash the gangland rackets. His name is Eliot Ness. Thirty years later, his exploits were immortalized in a weekly television series starring Robert Stack.

In just two and a half years, Ness and his team of federal agents destroyed the bootlegging empire of Chicago’s most notorious gangster, Al Capone. Because they couldn’t be bought off, Ness and his team were dubbed “The Untouchables.”

After he cleaned up Chicago, Eliot Ness became Public Safety Director in Cleveland, where he spent years hunting a notorious serial killer. It would turn out to be his most frustrating case.

In September 1935, the mutilated bodies of two men were found in Kingsbury Run, a slum district of Cleveland full of “the working poor,” hobos, prostitutes, and street toughs. The case was at first dismissed as a vicious, but routine double homicide. But by the summer of 1936, three more mutilated bodies were found. According to author Steven Nickel, the discovery of a sixth victim threw Cleveland into a panic: “When number six turned up, it was like a bombshell going off. The city really exploded. The press and the public now had no doubt that there was a serial killer out there, that this individual was going to keep killing and they wanted it stopped.”

The body count in Kingsbury Run climbed to twelve. Only two of the victims were ever positively identified: Edward Andrassy, a smalltime hood, and Florence Polillo, a 41-year old prostitute. All of the victims had been decapitated, in some cases while they were still alive. The tabloids dubbed the killer “The Butcher of Kingsbury Run.” Steven Nickel believes the crimes presented a new kind of challenge for Ness:

“Ness got into the case quite extensively. In fact, he devoted almost full time to it. But he didn’t know quite how to proceed with this case. It wasn’t like finding out where the mobsters were hiding and go and smash your way into the place. This was a different type of criminal that Eliot Ness was facing.”

Author Oscar Fraley describes how Ness worked up a profile of the killer:

“He determined from the way these bodies were cut up, somebody with a certain amount of medical knowledge. Plus the fact, it had to be a very strong man to carry these bodies all over and dump ‘em where he did. And so he had this profile that it has to be a big man, strong, an expert with a scalpel.” 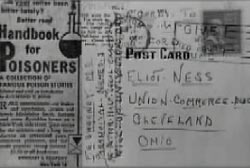 Another of the postcards sent to Ness

Ness was determined to search every building and shack in Kingsbury Run, but he had no legal grounds for search warrants. The solution was classic Eliot Ness; he teamed up detectives with fire officials and ordered widespread “safety inspections.” Steven Nickel described what Ness and his men were hoping to find:

“It was a thought among Ness and other police officers that they were going to find this laboratory that was gonna have blood splattered walls and have arms and legs lying over in a corner, maybe a cache of heads in another corner. Ness’s men spent almost a full week searching almost every apartment, every dwelling they could find in that area, and they weren’t able to turn up a thing.”

Ness was obsessed. His next move was to investigate every doctor and every hospital worker in Cleveland. Even the county coroner was not above suspicion. Hundreds of people were put under surveillance, questioned, and detained. But the investigation still led nowhere.

Then victims #11 eleven and #12 were found, one in a garbage pile just 200 yards from Ness’s office. Steven Nickel believes The Butcher was taunting Ness:

“The killer was now even becoming more daring by where he left the bodies. Right, really, under Eliot Ness’s window. It was almost like it was a cat and mouse game, and sort of catch me if you can type thing.”

Oscar Fraley says Ness was under extreme pressure to find the killer:

“He knew he had to do something, desperately, because the people were clamoring, all the people in town were insane about this insanity that was going on.”

Ness’ response was to come down hard on Kingsbury Run’s “hobo jungles.” His police rounded up more than 60 transients, believing that the killer might be among them.
Steven Nickel described it as a return to form for Ness; one that ultimately failed:

“This was his old “Untouchables” style of raid where you know where the bad guy is and you go in and get him, and he really thought that this might work. But it completely backfired for him. There was a great wave of public opinion that this was the act of a desperate man and that his tactics had been brutal and they didn’t really solve anything.”

Ness then ordered the shantytown burned to the ground. But of all the people arrested, none turned out to be the killer.

According to Oscar Fraley, Ness eventually targeted a prime suspect, a man who, in 1938, voluntarily committed himself to a mental institution:

“Ness believed that he had caught the killer, primarily because after this man committed himself to a mental hospital, the killing stopped. And he said, ‘I am certain this is the man, fits the profile.’ And if Ness had accused this man, whose family was socially prominent, he could have been libelous and been sued.”

Ness later received several postcards from a patient in a mental institution. Author Oscar Fraley says the postcards taunted him with references to the unsolved murders:

“The man who is sending him these postcards might have just been another kook. But he was convinced that he had found the guy.”

Ness never collected enough evidence to file charges in the case, but years later he told a reporter: “That case has been solved.”