African statues seems to have an effect on the fertility of women who touch them. 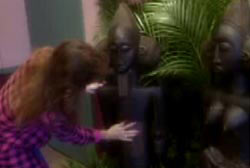 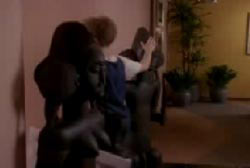 Women who touched them got pregnant

They came from a small village on the Ivory Coast, north of the Gulf of Guinea. They stand five feet tall, male and female, carved from solid ebony. To a local tribe called the Baule, the rare statues possess an amazing and awe-inspiring force: it is the power of fertility. 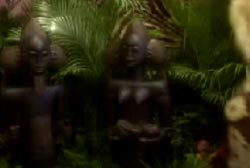 Anyone could come and touch the statues

In 1994, Edward Muier was searching the world for artifacts bizarre enough to add to the Ripley’s Believe It or Not Museum. He found the statues in a small curio shop. According to the owner, once the village shaman blesses the statues, they’re placed in a doorway facing each other. When a woman walks through and touches them, she’ll become pregnant.

Muier brought the statues back to the United States and, as a joke, put them in a doorway where they could do their best work. But what began as a joke quickly took on a life of its own. According to Muier:

“Within a few weeks, our receptionist was pregnant. And she is the person closest to them, and basically had to pass them more than anybody else. And she got teased unmercifully. I mean, ‘Oh, Lucy touched the statues.’ You know, ‘It must work. It must work.’ And then along came Kimberli.”

But for Kimberli, there was no escaping the statues’ seductive powers:

“I was walking down the hall and I tripped along the base of the female statue, looked down and my hand was resting on it. Thought at the time that the damage had been done. Couldn’t do anything about it then, so I just went on about my business. A month and a half later, I found out I was pregnant. I should not have gotten pregnant. Definitely, I was practicing birth control at the time. That was definitely a surprise, but it was a wonderful surprise.”

In 13 months, 13 women who came in contact with the statues became pregnant, including three of the 10 women who worked in the office. Edward Muier said that
as the word spread, strangers came in off the street to touch the statues:

“We just weren’t prepared for people phoning at all hours of the day, wanting to come and touch a statue. We decided to put them in our local museum in Orlando and let people come for free.”

Nancy McCaffrey gave it a try:

“I really think it did have something to do with it. I don’t know how. I don’t know why. But it’s just a little too ironic for me.”

According to Edward Muier, Ripley’s has received postcards confirming nearly a thousand pregnancies:

“I think you’ll find if you talk to any one of those people, you’ll find that they believe these statues had something to do with their pregnancy. Maybe that’s the power of suggestion, but it’s their power. They believe it.”