At a rest stop, two people are murdered and a third is wounded by a man posing as a police officer. 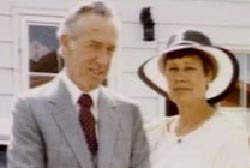 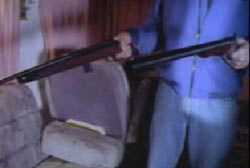 A man robbed them and killed Jackie 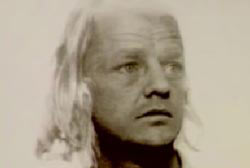 The killer is still wanted

On the morning of June 28th, 1991, Gord and Jackie McAllister of Lindsay, Ontario, Canada, were the only two people in the Blind River, Ontario Rest Stop. At 12:55 AM, they were sleeping peacefully when a man identifying himself as a police officer woke them by pounding on their window. He told them they needed to move their RV. When Jackie opened the door, the man barged in and demanded money and valuables. He was armed with a 22-caliber rifle and a 20-gauge shotgun. As Jackie went through her purse, the gunman shot her. Gord was also shot, but he managed to jump out of the vehicle:

“I rolled underneath the motor home, and I notice that another car had driven in to the rest area. And this guy had got out and was standing beside the car.”

Twenty-nine year-old Bryan Major got back in his car, but there was no escape. The gunman shot him, too, then ran off: 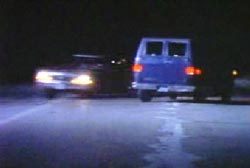 The blue van headed straight toward his car

Gordy flagged down a trucker, but it was too late. Gord’s wife, Jackie, was already dead. The gunman’s other victim, Bryan Major, also died at the scene. He left behind a wife and a young son. Gord’s injuries were minor.

When Ontario papers published a drawing of the gunman based on Gord’s description, a witness came forward. He said that a few minutes after 1 AM on the night of the murders, a blue van peeled out of the Blind River Rest Stop and headed straight toward his car.   The van continued dead east, toward Sudbury, Ontario. The witness didn’t notice if it had Canadian or U.S. plates. 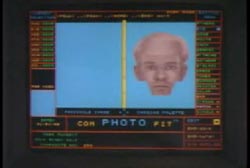 Police checked out more than 3,500 blue vans on both sides of the border, but, according to Detective Inspector Frank Ryder of the Ontario Provincial Police, they found no matches:

“The fortunate situation here is that we do have a survivor.  Gord McAllister survived his wounds, and hopefully, he can point out the killer someday.”

Gordon looked through hundreds of mug shots, but none jumped out. Then, the police turned to computer technology, hoping to improve on the original rough sketch of the killer. Gord helped work on a new drawing:

“I’ll never forget his face. It wasn’t a robbery gone bad. There was no resistance to this guy. He just simply was going to kill somebody. For no reason.”