Two explorers believe they’ve located the remnants of Noah’s ark in the mountains of Turkey. 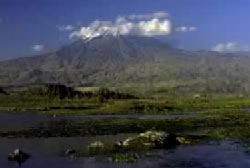 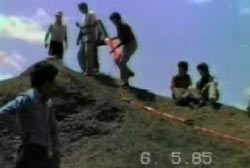 Mount Ararat: according to the Bible, it’s the area where Noah’s Ark came to rest after the great storm. It’s a desolate terrain rising above the headwaters of the Tigris River. In recent years, several expeditions have explored the Ararat Mountains. Incredibly, two separate teams believe they may have found the ark, in two different locations, 17 miles apart.

One of the sites is on Mount Ararat’s northeast side under a permanent 23-square-mile glacier. A Turkish businessman named George Hagobian said that when he was a young boy in 1906, he saw Noah’s Ark wedged in a melted part of the glacier. Hagobian described the vessel to archaeological illustrator Elfred Lee:

“He said it looked like a long box. It was rectangular and the corners were kind of rounded a little bit. The sides sloped in slightly. The roof, he said, was basically flat with just a slight pitch to it, and there was a stair kind of an apparatus at one end. His uncle hoisted him up onto this ladder, and he walked on up onto the roof. And there, all the way down the middle of the roof, he saw these holes, and he stuck his head in, and it was dark. He shouted, and his voice echoed and re-echoed inside. It was hollow. Hagobian went back a couple years later, saw the same thing, but ice and snow were beginning to cover it up again.” 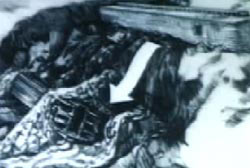 Seventeen years later, Elfred Lee met Ed Davis, who, in 1943, was stationed in Iran with the U.S. Army. According to Lee, Davis also said he had seen the ark:

“When Ed Davis started talking, the hair on the back of my head just stood up, because I could hear an echo of George Hagobian from years before.”

Ed Davis’ sighting occurred in roughly the same area as George Hagobian’s. However, Davis said when he saw what he thought was the ark, it had broken in two:

“We waited a while, and the fog kind of lifted, and it shone through in the end. You could see in the end of it. And we saw both parts. You stand there with your mouth wide open.”

Although Hagobian and Davis weren’t able to pinpoint the exact locations, their stories intrigued Don Shockey, an amateur archaeologist:

“I can’t think of anything more exciting that I could be doing in my lifetime than having a small part in seeing this, whatever it is, verified. And we have good reason to believe there’s something there. We’ve got to prove it.”

Don Shockey launched an expedition to Mount Ararat after studying classified U.S. satellite photos. Don said that for three days, he and his guides climbed up the mountain’s south side:

“Our whole goal was to get to this spot, over the top, down the glaciers, to this particular location and verify what the satellite information had told us.”

The Turkish government prevented them from traveling to the north side, so Ahmet, a Turkish guide, continued on by himself.

Ahmet crested Mt. Ararat and started down the north slope. At an elevation of nearly 16,000 feet, he spotted something half-buried in the snow. From a distance of 300 yards, he took a photograph, which seemed to show the end of a rectangular object with a peaked roof: Don Shockey recalled:

“He came back, and I said, ‘Is anything showing?’ He said, ‘A coop, a coop. Like a chicken coop. It had a pointed top.’ And he said that you could see the outline of it. He said in all of his years, he had never seen anything like it. He said, ‘There’s some artifact there.’”

Don Shockey believed that Ahmet might have glimpsed the remains of Noah’s Ark. Shockey returned to the States and took the photograph to forensic anthropologist Dr. Jim Ebert:

“It certainly does not look natural. It looks very strikingly man-made to me. What I see when I look at this is something that stands out from the rest of the terrain, and that is what looks like a solid structure. You’ll never know until you get up there and can see it and stand next to it.”

Shockey returned to Mt. Ararat and studied the mountain from the air. Unfortunately, the site was now covered by snow. Shockey stopped his search but remained convinced that he might have found the resting place of Noah’s Ark. Others, like author and ark researcher David Fasold, disagreed:

David Fasold was a former merchant marine officer and merchant salvage expert. He believed that the ark was buried a full 17 miles south of Mt. Ararat. Fasold said his team searched the site and discovered traces of iron, which don’t appear to be natural deposits:

“Every 20-30 inches, approximately, we have the remains of an iron fitting or iron pin of sorts that are still there in the soil and discernible.”

Fasold’s team brought back one of the iron fittings, one of 5,400 he said they found:

“It’s been cut in half by a diamond saw, scanned by electron microscopes at Los Alamos National Laboratory, and this particular iron fitting is 94.84% man-made wrought iron.”

Looking at the mound from above, the iron deposits form a distinct pattern of intersecting lines, which Fasold believes is the framework of the ark. Fasold said the boat’s length is 515 feet and the width averages 85 feet, the same measurements recorded in the Bible:

Some have suggested that David Fasold found the remains of an ancient Mongol fort. Others say it’s a geological formation. However, the Turkish government has declared the mound the official site where Noah’s Ark rests. Fasold said he’s certain of his find:

“The man who was in charge, Professor Sali Barrak Tutam, who is also a geologist, he says it’s Noah’s Ark, 200%. It is not a geological anomaly. It’s a man-made structure.”

Has one of mankind’s greatest mysteries finally been solved on a remote mountain range? It’s obvious that there needs to be more exploration before we’ll know the answer.