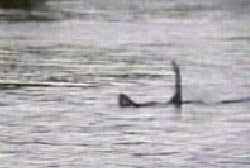 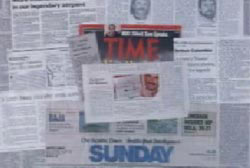 There was a media frenzy The creature had a long snake-like body

For centuries, Lake Okanagan in the Canadian province of British Columbia has been the reputed home of a mysterious water beast that resembles a sea serpent. In the 1700s, local Indians called the beast Naitaka, or Lake Demon. They often sacrificed small animals to appease the creature. Today, 300 years later, many locals still believe that the sea monster is real. They’ve even given it a new name: “Ogo Pogo.” Horace Simpson says he saw Ogo Pogo back in 1937:

“We were facing the lake at the time, and there’s this head of something or other swimming around out there and we were all convinced that it was the Ogo Pogo.”

“Very big. It was very scary.”

Ernest Girou says he got a good look at the creature:

“About two feet out of the water came the head. The head itself was round, and then a kind of a neck part went down into the water and it had a great big long tail.” 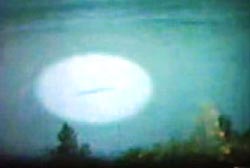 The creature is estimated to be forty feet long

Hundreds of sightings of Ogo Pogo have been reported. But no film footage was captured until 1968. That year, Art Folden and his wife were driving next to the lake when they noticed something strange:

“We saw something in the lake near the shore, and I said, ‘Hey, look!’ Just jokingly. ‘There’s Ogo Pogo.’ I said, ‘I want to stop and see if I can get a picture.’ I stopped filming every time it dove under the water. And as it reappeared I began filming again. The film shows a dark object diving, reappearing, in a sequence of moves that indicates that it’s moving out from shallow water into deeper water.”

The dark mass in Art’s film is estimated to be forty feet long. 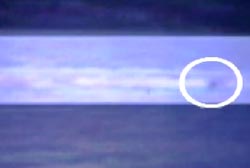 Witnesses said the creature had an appendage

In 1980, twelve years after the Folden film was made, a group of vacationers thought they, too, had seen Ogo Pogo. One of them, Larry Thal, had a home movie camera:

“I was taking pictures of the kids and the wife, and bingo! All of a sudden the Ogo Pogo, supposedly, whatever it may have been, appeared on Lake Okanagan, and I was right there with my camera. It was a strange sight in the water.”

“Larry’s film shows how the animal swims. It shows the speed and the massive waves that it creates. It actually shows that it has some sort of appendage that seems to pop up every now and then. But the interesting thing is that the animal that Art Folden shot and the animal that Larry Thal shot, they’re basically the same size. They’re very large creatures. And in Larry’s film, we’re seeing a creature at least 40 to sixty feet from head to tail. No doubt. No doubt.”

Nine years later, on July 18th, 1989, 78-year-old Clem Chaplin showed his son, Ken, an inlet where he thought he had seen Ogo Pogo. Ken took his video camera and staked out the area. It paid off. What Ken taped was a creature that appeared to be hairless, greenish in color, spotted, and about fifteen feet long, less than half the size measured in the Folden and Thal films. Ken is clear about what he saw:

“I saw its features as being snake or lizard-like. No fur or hair. And you can see the body thrashing behind it. And then it brought its tail section out of the water. Dad and I were stunned into silence. And then Dad turned to me and he said, ‘You know if that tail hit a man it’d probably kill him.’ And I agreed. That was our impression as to size. He had appeared swimming parallel to the shore and swam right past us, at maybe sixty to seventy five feet away.”

Ken’s video made headlines. Time Magazine and many newspapers carried the story of what appeared to be a new “Loch Ness-type” monster. Experts were called in to analyze the video. One of them was regional wildlife biologist Robert Lincoln:

“It was not a hoax. There was nothing in there that gave us the impression this was fabricated in any way. It was a live, living animal. The discussion revolved around the two species most likely, and that is a river otter and a beaver. Ogo Pogo could exist elsewhere in Okanagan Lake, but in our view, this particular video was of a beaver.”

Ken Chaplin says the creature he saw was too large to be a beaver:

“The largest recorded beaver in the interior is four and a half feet long. Now at seventy five to a hundred feet away, I just can’t see Dad and I being very impressed.”

Robert Lincoln compared a video frame from Ken’s Ogo Pogo footage, with a photograph of a beaver about to slap its tail on the surface of the water. He contends that they are mirror images of each other. Ken disagrees. He says the creature he saw was fifteen feet long, not four feet like a beaver.

“I’ve asked myself thousands of times, ‘Is there a possibility I could be mistaken?’ And I just can’t see where I could be.”

“For those who want to call it a beaver? I’ll say, no way. An otter? I can’t buy it. A miniature Ogo Pogo? In all probability.”

Experts may disagree about Ken’s footage, but there’s still no explanation for the 40-foot-long creature seen in Art Folden’s film, or the similar one churning up a wake in the Larry Thal footage. And hundreds of other sightings attest to the presence of something unusual in Lake Okanagan. Robert Lincoln offered some advice for would-be Ogo Pogo hunters:

“I would be delighted to find that Ogo Pogo really existed in Okanagan Lake. And I would encourage everybody to keep, not only their minds open, but their eyes open, when they’re in the Okanagan. Who knows what really exciting wildlife encounter that they may enjoy?”

Is Ogo Pogo real? The Canadian Government seems to think so. They’ve issued a postage stamp depicting an artist’s rendition of Ogo Pogo.