The murder of an airport worker may be connected to a stolen credit card ring among employees. 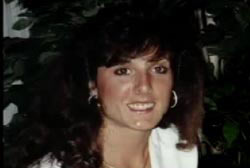 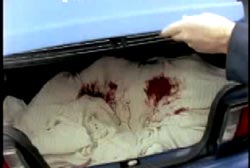 Her body was found in the trunk of her car 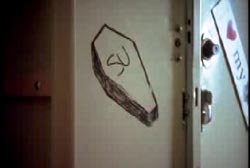 Twenty-four year-old Su Taraskiewicz was a trailblazer. She was a woman working in a man’s world, on the tarmac of Boston’s Logan Airport. Her mother, Marlene Taraskiewicz, said Su loved her job:

“Sometimes she’d come home and say, “I lifted a million bags today and they were 200 pounds each.” She’d make a joke out of it. But she never complained about the job. She loved it.”

Su was the second woman to ever work for Northwest Airlines as a ground service employee. She worked her way up from cleaning the interiors of jets. After three years, she was promoted to ramp supervisor, the first woman to ever hold that position.

On the morning of September 14, 1992, Su’s car was discovered at an auto body shop not far from the airport. In the trunk was Su’s body. She had been beaten and then stabbed multiple times. There was no sign of robbery or rape, so her family assumed that she was the victim of a random crime. 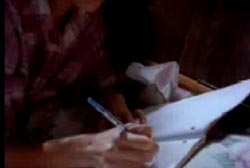 For more than a year, Su’s family grieved. Then, at Christmastime 1993, Marlene Taraskiewicz finally went into her daughter’s room for the first time since the murder. What she found there was shocking:

“I tried many times to go in Su’s room. You know, you’ve got to do this. It’s a year. You know you should. Let me get something that was special to her and we’ll just put it out. And I started going into her closet and I saw a briefcase there.”

Inside Su’s briefcase was a diary. In vivid detail, she described the sexual harassment that she had endured on the job. They were ugly incidents she had never mentioned to her family. The journal included examples of the graffiti — insulting, demeaning, and lurid — that had been etched in the men’s rooms at the airport, and even in the cargo holds of jets. Su’s mother knew it had something to do with her murder:

“What I read, the filth that somebody would write about my Susan. And I thought, is this why she was murdered? And we thought, this is it. We have solved Susan’s murder.” 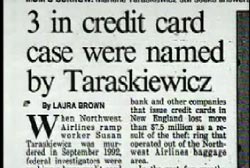 The indicted workers were named in the diary

In page after page, Su described acts of hostility. In one incident, she wrote of a co-worker named Bobby who purposefully dropped her radio on the floor. Su’s boyfriend, who also worked at the airport, spoke to Bobby and demanded that he replace the radio. Then, later that day, Su confronted Bobby herself. Bobby blew off the incident and made a threat about beating up and killing her boyfriend.

Su filed many formal complaints with the management of Northwest Airlines and her union, but little was done to stop the harassment. In fact, according to Laura Brown, a reporter for the Boston Herald, it increased, often in the form of nasty graffiti:

“It wasn’t apparently just one or two pieces of graffiti that made their way up and then were washed away. It was repeated cases of graffiti of varying kinds. In some cases, it amounted to death threats against other workers who were supporting Su. Su also talks in her diary about getting anonymous phone calls at all hours of the night. She recorded some of the times the phone calls happened. She also had instances where her car was vandalized. Her boyfriend’s car was vandalized. Friends who were supporting her had their cars vandalized.”

Despite the abuse, Su’s career hadn’t slowed down. In February 1992, she was promoted to ramp supervisor and put in charge of the employees that she had once worked with on the tarmac. Initially, Su was passed over for the promotion. A man in her union had illegally bid for the job, so Su filed a grievance and won. But the victory made some of her co-workers uncomfortable. One of Su’s co-workers, Joseph Snow, said it had to do with the fact that Su was female:

A few months after Su’s promotion, the graffiti became more sinister. She once found a coffin scrawled inside her personal locker.

On September 12, 1992, during a graveyard shift, Su volunteered to go pick up sandwiches for her crew. She never returned and no one reported her missing for a day and a half. Authorities now believe that Su’s death may have been connected to a federal investigation of Northwest Airlines that took place that summer.

Some baggage handlers were operating a stolen credit card ring. When shipments of new cards were transported by Northwest jets, a group of workers was stealing them, using them, and then selling them. The scam netted over $7 million. Eventually, ten Northwest employees were indicted and convicted. To Su’s mother Marlene, some of the names were very familiar:

“There were names of people that were in Su’s diary, that had sexually harassed her from day one. I believe that Susan was set up by her coworkers, that for whatever reason, they were afraid that Susan was going to squeal on something.”

Northwest Airlines declined Unsolved Mysteries’ request to be interviewed for this story. But they have settled a sexual discrimination lawsuit brought against them by Su’s family. It was one of the largest discrimination settlements ever granted in the state of Massachusetts.

Authorities still consider Su’s case open and active. Her family is offering a $250,000 reward for information leading to the arrest of their daughter’s killer.