An Australian pilot disappears after reporting an encounter with a UFO. 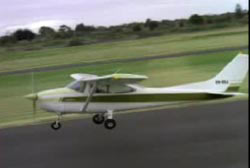 The Cessna 182 took off smoothly

On October 21, 1978, just south of Melbourne, Australia, a single engine Cessna lifted off from Moorabbin airport. The pilot was 20-year-old Fredrick Valentich. Valentich had been flying for two years and logged over 150 hours of solo time. Headed for King Island, his flight plan called for a 40-minute trip west along the Australian coast. Then, at Cape Otway, he would head south for a half-hour run over Bass Strait. Ken Llewelyn of the Royal Australian Air Force had this to say about Fred’s flight:

“It was a fairly normal exercise. He had an appropriate instrument rating for the trip. It was a very straightforward flight, and I could see no reason why it shouldn’t have concluded successfully. What happened 3/4 of an hour into that flight, I think, will be one of the great mysteries of Australian aviation.” 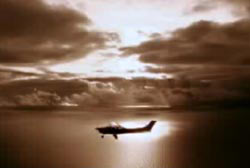 It started as a routine flight …

Valentich was in contact with a flight service center on the ground when he reported a large aircraft that passed 1,000 feet above him several times. Stephen Robey was the ground controller communicating with Fred:

“He wasn’t to the point where he was panicking, but he was genuinely concerned by what he saw, with what he saw. He was worried. He sounded confused. Then, as he described what the aircraft was doing, I became a little bit concerned, too.”

What Fred reported was that the craft was stationery, hovering in midair as he flew around it. The following is a transcript of the radio communication:

Fred: It’s got a green light that’s sort of metallic, like it’s shiny all over. It’s just disappeared. Is this some sort of military aircraft or what?

Tower: Delta, Sierra, Juliet, is the aircraft still with you?

Fred: Delta, Sierra, Juliet. Now approaching from southwest. Delta, Sierra, Juliet, the engine’s gone into half idle. I’ve got it set on 23, 24. This thing’s just coughing. This strange aircraft’s just hovering on top of me again. It’s hovering, and it’s… it’s not an aircraft.

Search boats found no trace of the plane

Suddenly, an unidentifiable clicking noise came over the radio. The sound lasted 17 seconds. Then silence.

For four days, a flotilla of search vessels crisscrossed Bass Strait. There was absolutely no sign of Valentich or his aircraft. There was no evidence to suggest there’d ever been a crash. All that remained was a final baffling radio transmission.

People could only speculate as to what really happened, until a witness came forward with a firsthand account. Around the time of Valentich’s disappearance, an eyewitness and his family were returning from an afternoon outing when they noticed unusual activity in the sky. The witness has asked that we do not reveal his identity:

“I looked up and saw this long green light about 1,000 or 2,000 feet above the aircraft. So we sat there and watched it for a few seconds. And the green light crept closer to the plane. I said, ‘That plane is coming down pretty steep. It’s on a 45 degree angle.’ I said, ‘I think it’s going to crash.”

The eyewitness account suggested that perhaps Valentich had an encounter with a UFO. He never saw whether the plane crashed. The only certainty was that Valentich had vanished. Six weeks later, an amateur photographer came forward with even more startling evidence.

On the evening of the flight, Roy Manifold had been setting up to photograph a sunset at Cape Otway, which was almost directly under Valentich’s flight path:

“I’d done the normal thing, had the camera on automatic exposure, and I took six photographs of the sun disappearing into the sea.”

When developed, Manifold said one of the photographs displayed a peculiar blemish:

“I observed this mark on the print that looked like a developing error or something. They mussed it up. I said, ‘Just a minute, that night I took that is exactly the night that this guy disappeared.”

A leading Australian photo lab found neither dirt nor damage on the negative, determining that the strange mark was actually in the picture. The negative was later sent to the United States for computer analysis by a team of UFO researchers. They claimed that the blot was actually a solid, metallic object. To them, it appeared to be enveloped in a cloud of exhaust situated about a mile from the camera. A second, analysis, however, stated that the mark could be a developing error. Either way, Roy Manifold believes the photograph does show something of consequence:

“Unfortunately, I didn’t see it, and I didn’t hear anything that night, either. First time I’ve had something on my printings, and I’ve done thousands of photographs, and without any incidence of anything like that on them.”

Thirty years have passed since Fredrick Valentich flew off to his uncertain fate. However, the questions raised by his mysterious disappearance are just as disturbing today. What exactly did Valentich see in the minutes before radio contact was lost?

Perhaps the secret of Fredrick Valentich lies many fathoms beneath Bass Strait, or perhaps it lies far from our planet, light-years beyond our understanding.