Bigfoot sightings are rampant in the Pacific Northwest. 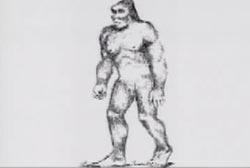 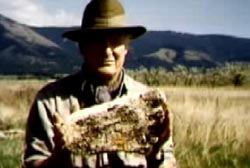 Many believe Bigfoot is the missing link between ape and human. For Peter Byrne, head of the Oregon-based Bigfoot Research Project, finding Bigfoot is a matter of scientific discovery:

“We don’t want to capture it. We don’t want to shoot it. The ultimate find, as far as we’re concerned, would be to do something like what Jane Goodall did, in other words, to find one, see if we can communicate, have it lead us to others, and then bring in the right people. Totally responsible people. Bring in scientists, and show them what we’ve found and document the whole thing, of course.” 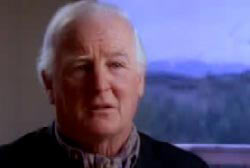 Until now, the evidence for Bigfoot has consisted of amateur photographs, plaster casts of large, humanoid footprints and home movies that supposedly show the creature in the wild. But if Bigfoot is real, the one type of evidence that must always be considered is eyewitness accounts.

Todd Neiss is a sergeant in the Army National Guard. In 1993, he was on demolition maneuvers with his unit when a distant movement caught his eye:

“I could distinctly see three large black figures. I would estimate the largest one to be between eight or nine feet. I could very plainly see they were upright on two legs and…during that entire time, all three of them were standing on two legs. Another sergeant walked up to me and said, ‘Neiss, did you see what I saw down at that second rock port?’ And, not to be a fool, I said, ‘Well, I don’t know, what’d you see?’ He followed with, ‘Well lack for a better word, what I saw were three, large, hair-covered, big feet.’”

“When they’re seen in the daytime, it’s the result of disturbance of some kind. In this case, there was a National Guard exercise with explosions, and immediately after the explosion, three of these things were seen.”

When Elmer Frombach, a part-time prospector from Seattle, Washington, took his family on an outing near the Canadian border, he came home with one of the most amazing Bigfoot sightings on record. 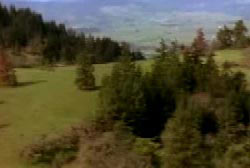 Elmer had just begun taking ore samples on a trail near a hillside, when he suddenly realized he was not alone:

“I saw a big black hairy mass. And at that time I kept thinking in my mind I’ve got to find a way to scare it, and I fired a shot above its head, and it turned just slightly, and then proceeded to walk down the trail as though I wasn’t even there. And as it walked away from me, it took perfect, human-like strides, down the trail, only like a giant man. This thing had crouched down at the end of the trail and it picked up a rock, the size of a basketball, and was using it to bang against the other rocks that again made a slight-sideways turn, just enough to see me out of the corner of it’s eye. I was scared and I wanted to get out of there. I kept running down the hillside and the thing was in hot pursuit the whole way.”

Elmer is confident the creature he saw was Bigfoot:

“What I saw there was a living creature and not some figment in my imagination. Modern science hasn’t absolutely proven…that this thing exists. But I tell you, quite frankly, I’ve seen one. I know it exists. And there is no doubt in my mind.”

However, eyewitness accounts like Elmer’s are not enough evidence to convince skeptics.

Daris Swindler, a Professor of Anthropology at the University of Washington, wants to see tangible proof of Bigfoot’s existence:

“I’m amazed that through all the years various people that have been hunting Sasquatch through the years, have not really found any, what we call bone or dental evidence of the creature. That to me would be very satisfying.”

Is the Pacific Northwest home to a colony of ape-like creatures? Eyewitness like Todd Neiss and Elmer Frombach are convinced Bigfoot is real. There only hope is that the scientific community will soon take notice.